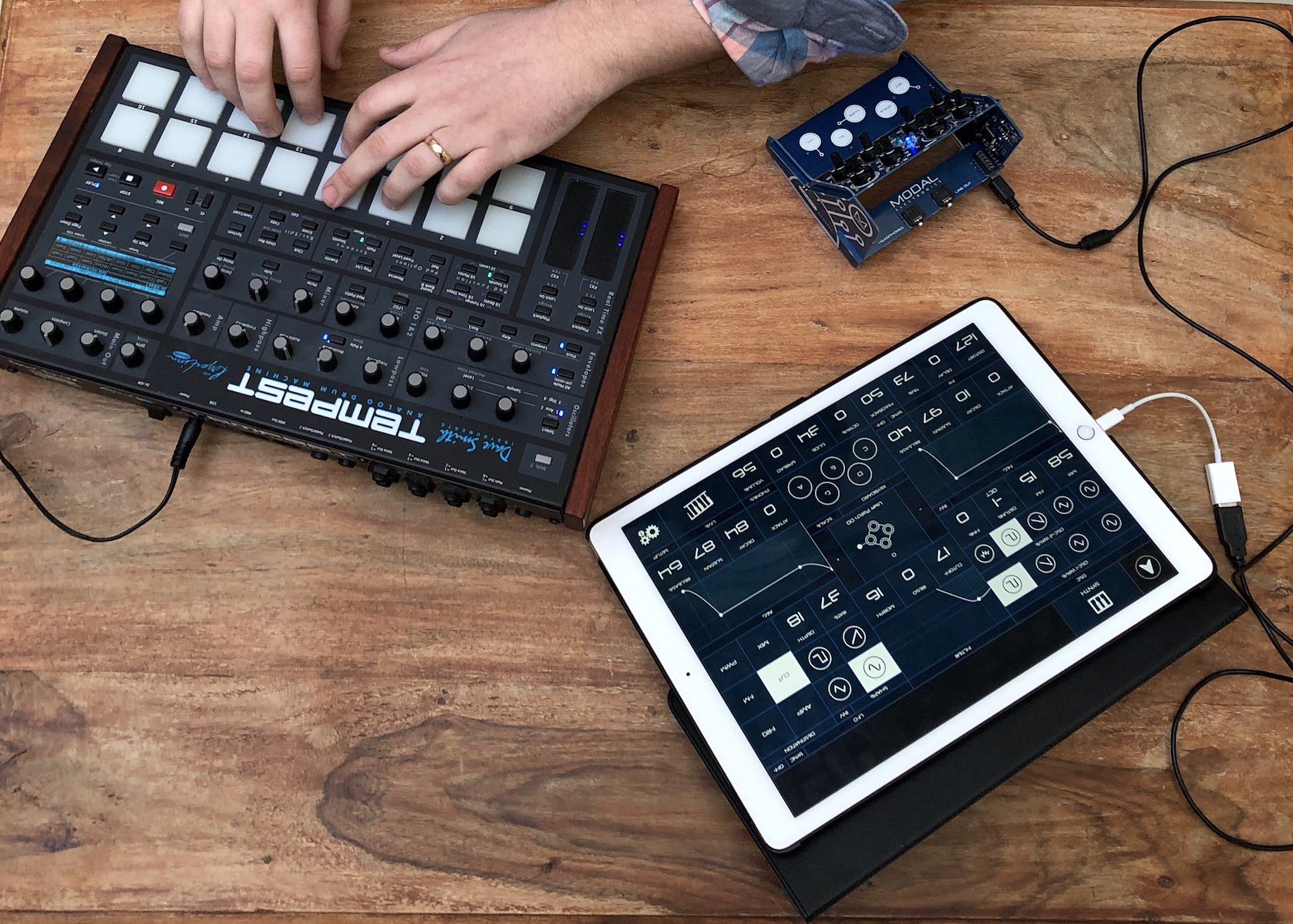 Ever since the first four track tape recorders introduced musicians to the potential of being able to record outside of professional recording studios, home recording equipment has become increasingly more portable. Nowadays, countless artists make use of portable set ups, using laptops to produce hit songs in their bedrooms, on tour buses and pretty much everywhere in between. But what about carrying around an entire recording studio in your pocket? As more music making apps are being developed, an increasing number of musicians are taking advantage of the extra portability of iOS devices. Whether this is simply as way to sketch out musical ideas on the move or as a complete replacement for their desktop setup.

iOS has come a long way since the very first iPhone was released, and so have the platform’s music making capabilities. Initially users weren’t even able to connect their separate iOS music making apps, which was massively limiting. However, over the years advancements like Audiobus, Inter-App Audio and AUv3 have all contributed to creating a unique workflow, encouraging users to mix and match their music apps in creative ways. 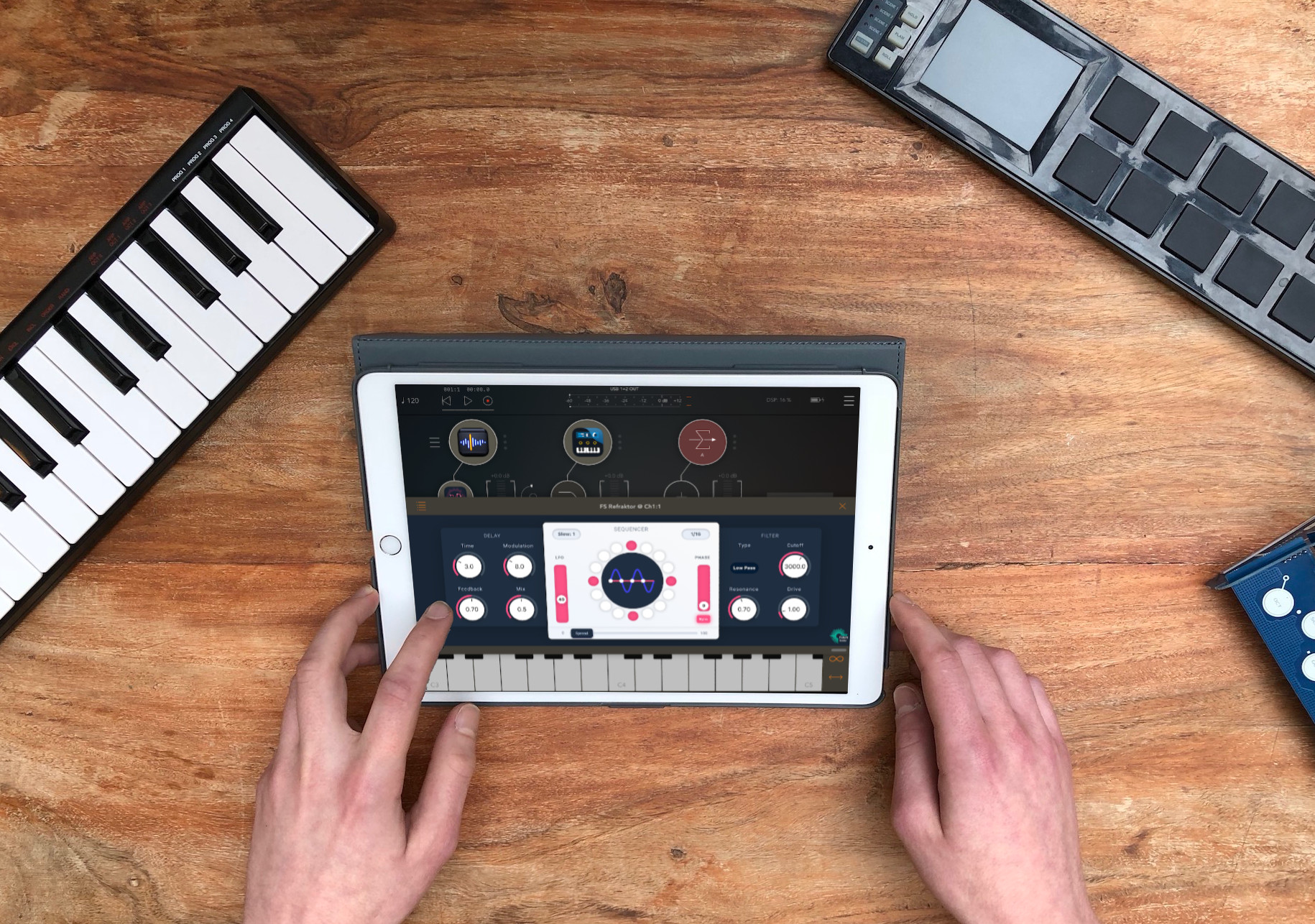 For many, the appeal of iOS music making lies in the platform’s convenience and portability. Being able to pull out a phone or iPad and start writing music whenever you’ve got a spare moment is certainly a solution for enthusiasts struggling to fit in time for music in their busy schedule. Aside from this, another huge advantage of iOS is simply the price. An effect plugin app on iOS might cost £4.99, while the equivalent desktop software could easily be ten times that. And with the choice of available music apps constantly growing it’s not hard to see why the platform is growing in popularity.

However, if completely ditching your desktop isn’t a path you want go down then there are plenty of ways to integrate your mobile studio with your pre existing setup. For example, Logic Pro X users can export files from GarageBand on iOS and open them directly in Logic, making it easy to write ideas on the move and then polish them on desktop. Ableton users, meanwhile, can take advantage of Ableton Link, which allows users to sync compatible apps to their Ableton Live projects with the touch of a button.

If you’re serious about making music on iOS then your first consideration should be which DAW to go for. For the vast majority of desktop producers, their DAW is at the heart of everything that they do, and mobile is no different, with there being a whole host of excellent DAW apps available. We can split these apps into two distinct categories: those that follow the traditional DAW layout and those that are built from the ground up with iOS in mind. Each layout comes with its own advantages and disadvantages and choosing which to use depends entirely on your preferred workflow.

This layout is probably what most people have in mind when thinking of a DAW. Based around the classic, mix and arrange windows that are utilised by desktop software like Logic Pro, Cubase and Pro Tools, these apps will look familiar to any desktop musician wanting to make the move to mobile. The major advantage of apps like these is that there isn’t much of a learning curve if you’re moving over from desktop – Garageband will be familiar to Logic Pro users and Cubasis will be like second nature for any desktop Cubase users. 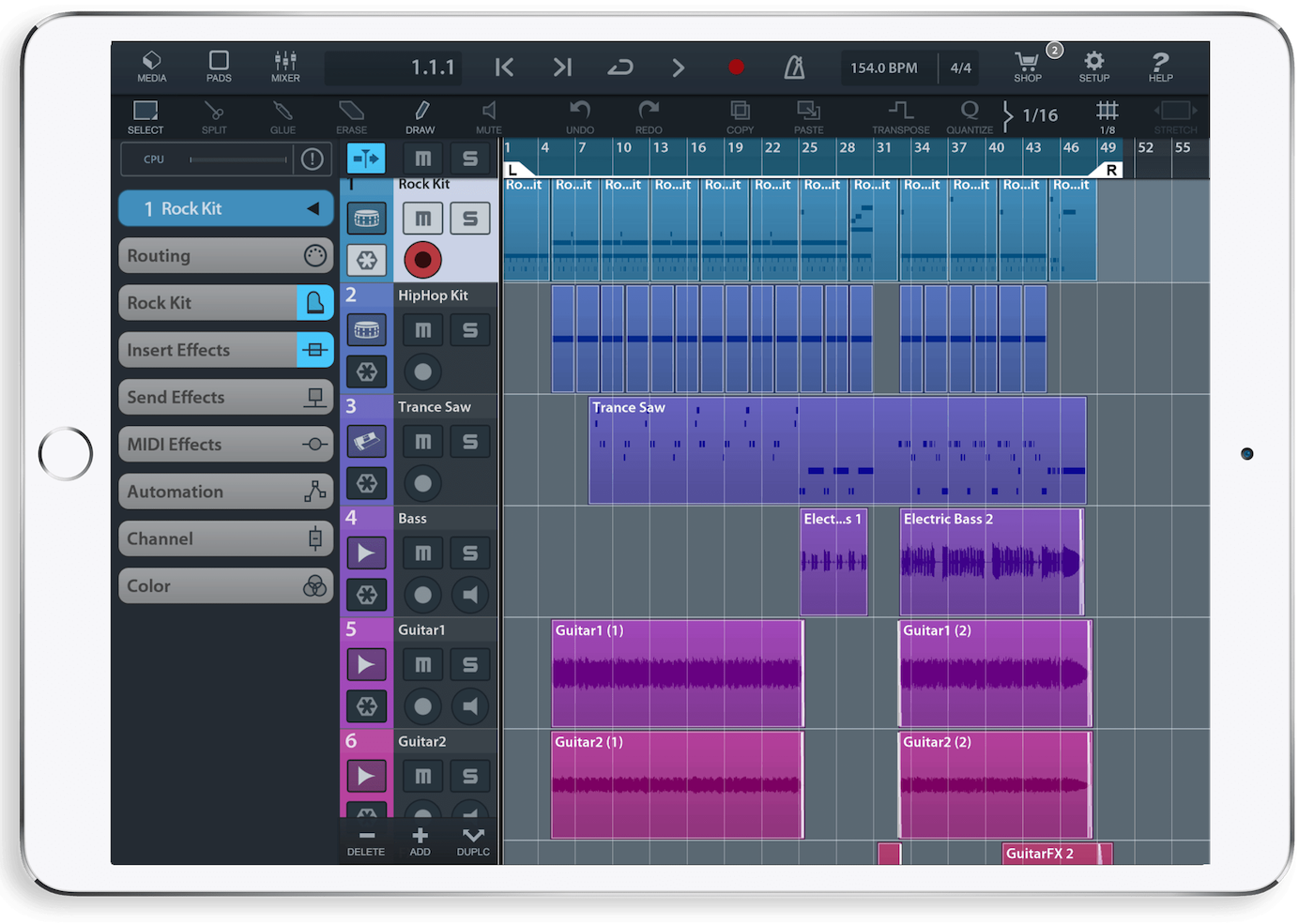 On the other hand we’ve got apps like BeatMaker 3 and BeatHawk that move away from the standard DAW layout. Instead of the standard mix and edit views, these apps make use of multiple different windows to keep the screen clear of clutter. In addition to this, features such as MPC style drum pads work excellently with the iPad’s touch screen and make writing beat driven genres more intuitive. However, navigating the various screens and adjusting to the workflow of these apps may take some getting used to if you’re migrating from desktop or are more accustomed to the traditional DAW layout.

Although it doesn’t really fit into either of these categories, and isn’t strictly a DAW, AUM definitely deserves a mention. The app is essentially a mixer app, which serves as a host for AUv3 and Inter-App Audio compatible apps. Its intuitive design has made it a firm favourite for anyone wanting to set up an improvised jamming session using both apps and hardware and is integral to plenty of live iPad set ups. Plenty of iOS producers go as far as combining AUM with sequencers apps like Modstep to effectively build a DAW of their own.

We’re yet to see iOS music production really take off in the mainstream, but there are a small number of professional producers that swear by the platform. Some notable examples of iOS in popular music include Gorillaz releasing The Fall, an album entirely recorded and produced on iPad and ‘PRIDE’ from Kendrick Lamar’s Grammy Award winning DAMN. which featured a beat produced using nothing but an iPhone 6 and GarageBand.

Currently, the majority of music making apps being developed for iOS are built by small teams or lone developers. However, over the years more and more bigger name businesses have entered the fray, with Korg releasing Gadget, Module and a slew of synthesizer apps. Meanwhile, others have been a little more tentative, for example Waves and Fabfilter have both released plugins for iOS, however these are only available as in-app purchases inside Cubasis and Auria Pro respectively.

But with the popularity of the platform growing and iOS devices only becoming more powerful and capable, there’s certainly potential for more big name music tech companies to jump on the iOS bandwagon. It remains to seen what’s next for the platform but here at FutureSonic, we believe that the future is bright for iOS music making.